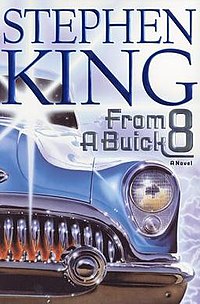 Shortly after his father, a Pennsylvania state trooper, is killed in a senseless automobile accident, Ned Wilcox discovers that the members of Troop D have a secret concealed behind their headquarters. Curtis Wilcox's friends and colleagues take turns relating the twenty-year history of the mysterious Buick Roadmaster locked in Shed B and how its discovery and unexplained behavior has captivated the tightly knit group of men for two decades. The Buick seems to be a conduit to another reality and every now and then it breathes, inhaling a little bit of this world, exhaling a little bit of whatever world it came from. The book was inspired by a real-life incident where Stephen King slipped and fell down a hill behind a gas station and wondered how long it would have taken someone to find him down there if he had been badly injured or killed. (It was not, as some have conjectured, based on King's infamous car accident; he actually wrote about the car accident in this novel before it happened to him in real life.)

From a Buick 8 has connections to the following books:

The Buick transports objects to todash darkness. It is implied to be the car of a low man.